Few brands have marked the history of motor boating like the Magnum Marine. In the 80s and 90s, the Miami shipyard was an absolute point of reference for all owners who were seeking a very fast, high-performance motor cruiser that was comfortable and seaworthy at the same time, ready to face all seas, even the most challenging.

Conscious of this, Tommaso Spadolini responded in perfect harmony to the request of the two owners. The architect tackled the refitting of the two Magnums with all the respect and attention that two authentic icons of motor yachting deserve.

"The Magnum 63 had been in a shed for many years. When we restored it, we decided to retain the original Pininfarina design," Spadolini explains. "The voluminous forward handrail has been removed, a more profiled windshield has been created while retaining the roll bar, which, although not always appreciated, is characteristic of the original model. In the stern area, next to the sundeck, the two side windows have been reassembled; these windows also function as handrails, as well as maintaining the central gangway aft. The white colour with two large blue bands is completely new and was a specific request from the owner who, as a great fan of historic cars, was inspired by the colours of American 'muscle cars', from Mustangs to Shelby Cobra."

The yacht mechanics have had a total makeover: the original Detroit Diesel motors have been replaced by two modern MTUs (2,000 hp each), always combined with Arneson Drive transmission with surface propeller. The cockpit layout is essentially unchanged but has been completely refurbished with modern furniture. Similarly, the old analogue instruments on the bridge have been replaced with more modern digital monitors. The interiors have also been completely renovated, but this will be the surprise of the next release.

Refitting is under way at the Carm di Lavagna shipyard, which Tommaso Spadolini has been collaborating with for years. The launch is scheduled for mid-June.

"The intervention on the Magnum 38 was more radical. Other than the hull, only the portholes were retained,” Spadolini says. "In this case, the owner's request was to make it a fast day cruiser, a maxi tender for a larger yacht. So we replaced the original shaft-line transmission and the two petrol engines with a pair of Cat turbodiesel motors (500hp each) with Top System surface propeller drives. This required a complete overhaul of the engine room and the strengthening of the transom."

The cockpit layout has also been fully renovated with a more modern solution. The full-beam sundeck has been replaced by two side beds with a central aisle, which can potentially be covered by a third element, while a dinette opens forward with more modern solutions. The original structure was kept on the dashboard, with some analogue clocks still in use, albeit cohabiting with modern digital instruments. Below deck, a single open space was created, thus respecting the owner's request to have a day cruiser, but with two bathrooms, one for the toilet proper and one for the shower.

"The colour of the hull, grey with a white deck, was chosen by the owner to match with the yacht in which the Magnum 38 will be used as the maxi tender,” explains Spadolini. “Refitting is currently under way at the Azzurra shipyard in Gaeta, with its proud team of highly skilled workers and a rich seafaring culture. The launch is scheduled for the spring". 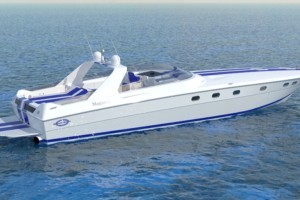 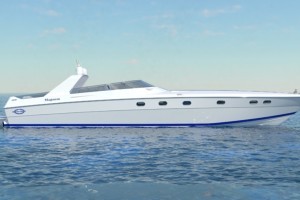 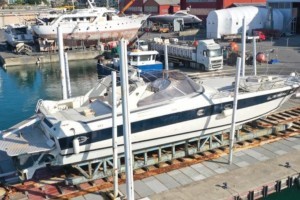 Next Yacht Group, two more units in the AB 100 range were sold

Massari Design will be in Monaco on board two exclusive jewels