Maserati and Giovanni Soldini set off for the RORC Caribbean 600

Giovanni Soldini and the crew of Maserati Multi70, who hold the race speed record set in 2019 at 1 day, 6 hours and 49 minutes, will face their direct rivals: Peter Cunningham's PowerPlay from England, skippered by Ned Collier Wakefield, with the great French navigator Loick Peyron on board; and Jason Carroll's American Argo with Brian Thompson. Antoine Rabaste and Jacek Siwek are participating with the 80ft Maxi Multi Ultim Emotion 2.

From Antigua, the 75-boat fleet, which will tackle the 600-mile Caribbean race, will navigate with many manoeuvres between the islands of the Lesser Antilles archipelago: first Barbuda, Nevis, Saba and Saint Barth, followed by the island of Saint Martin and then a lap around Guadeloupe, before the final buoy off Barbuda with the finish line in Antigua.

"The conditions are favourable: we will have a stable trade wind around 13/14 knots," explains Giovanni Soldini: "The most critical passages will be in Guadeloupe, a high and mountainous island around which there can be flat calms. Sailing between the islands means facing constant changes of direction, winds and currents. PowerPlay and Argo are two top teams, all three boats are very similar and so it's also a good opportunity to see the results of the foil research that each of us has developed differently. Over a distance of 600 miles, you can't be distracted because every minute counts: we will fight with a knife between our teeth".

Maserati Multi70 is participating in the RORC Caribbean 600 for the fourth time after having raced the 2017, 2019 and 2020 editions. In this regatta, Giovanni Soldini will be accompanied by a crew of 7 sailors. Guido Broggi is back on board and the team that won the RORC Transatlantic Race a few weeks ago is joined by French navigator Gwénolé Gahinet. 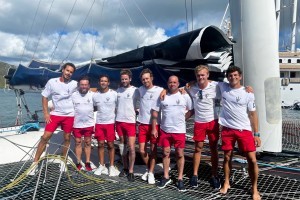 2nd Run of ItalianGerman Sleeping Beauty Destriero to the USA

Giovanni Soldini in Lisbon for the UN ocean conference

RORC Caribbean 600: Soldini and Maserati Multi70 were the second to cross the finish line

Maserati and Soldini return to compete on the 600-mile course