Leg 9, from Newport to Cardiff, on board Brunel

The top three teams in the Volvo Ocean Race are within three points after Bouwe Bekking’s Team Brunel won Leg 9 into Cardiff, Wales to vault into contention for the overall race win.

The Leg 9 results also mean a new team is at the top of the race leaderboard as Dongfeng Race Team, with a third place finish, take overall race honours by just a single point over MAPFRE, who settled for a disappointing fifth place finish on the transatlantic leg.

With the win, Bekking’s Brunel is just three points off the lead, meaning the final two European legs will be more important than ever. Although Brunel sits in third place this morning, the Dutch entry is riding a wave of momentum.

Since the team hit a low point at the conclusion of Leg 6 after arriving in Auckland with a sixth place finish, Bekking and crew have posted a 1-2-1 scoreline, including important wins on the final two double-point scoring legs, to move from also-ran status on the leaderboard to holding down a firm grip on a podium position with an eye on the top spot.

“We’re very happy with the result – to beat the two red boats (Dongfeng and MAPFRE) was the objective,” Bekking said after crossing the finish line. “Winning of course is nice, as well as to get the bonus point and then a nice fight to beat AkzoNobel in the end as well, so we’re a happy team.

“But the aim is to keep looking forward. We’ve closed the gap to MAPFRE and Dongfeng and victory remains our main objective.”

To earn the leg win, Bekking had to fend off fellow Dutch skipper Simeon Tienpont’s team AkzoNobel, who had held a nominal lead of a few hundred metres just hours before the finish.

But in the strong currents and light winds of the Bristol Channel, Bekking and his crew found a way to claw back in front and then protected over the final miles to take the win by just 4 minutes and 05 seconds over team AkzoNobel.

For Tienpont’s AkzoNobel, Leg 9 will be long remembered for the amazing record-breaking effort the team made in setting a new standard for 24-hour distance run in the Volvo Ocean Race.

On Friday, in ideal conditions, the team AkzoNobel crew obliterated the previous race record set in a Volvo Ocean 70 by Ericsson 4 in 2008. The new mark is a 602.51 nautical mile, 24-hour run.

“This was an incredible race,” Tienpont said from on board at the finish line. “I’m unbelievably proud of the crew. We kept pushing all the way to the finish line and we’re happy with second place.

“We enjoyed setting a record that hopefully will be hard to beat. It’s been a leg full of emotions and we’re looking forward to the last two legs… We’ve done unbelievably well since Melbourne. From there onwards we’ve scored more points than MAPFRE and Dongfeng. So the confidence is there and as a crew we’re enjoying it so much. We’ll just keep fighting and do what we did on this leg.”

Dongfeng Race Team skipper Charles Caudrelier has elevated his team to the top of the race leaderboard for the second time since the start of the race. With a sixth podium finish the most consistent team in the race controls its own destiny at the head of the fleet.

“It’s nice, but it’s a very small lead to MAPFRE and now Brunel as well who are making a fantastic comeback,” Caudrelier said dockside after the finish. “So it’s going to be interesting for fans to follow as the race is far from finished. The level is very even and it’s a big fight for every place… we would have preferred an easier finish!”

While Brunel has been ascendant on the last three legs and Dongfeng consistently among the leaders, MAPFRE roared out to a fast start in the opening legs, but has struggled of late.

Even on the recent leg into Newport, which was scored a win, the Spanish team trailed for nearly all of the leg, making a miraculous comeback from fifth to first in the final 24 hours. The team will need to regain its early form if it is to make one more comeback and win the race.

“It hasn’t been an easy leg for us. It’s been painful from day one and we never could catch up,” said skipper Xabi Fernández. “But looking forward we feel confident. Hopefully we can start well and fight boat to boat over the next two legs.”

Scoring a fourth place finish on the leg was Charlie Enright’s Vestas 11th Hour Racing. The team has prided itself on its podium finishes, but this leg marks its worst result across the finish line in the race.

However having missed three crucial legs in the middle of the race, the team’s position on the overall leaderboard is all but locked in at fifth place.

“It was a disappointing leg from a results standpoint, but that doesn’t take away from what was a good crossing for the team,” Enright said. “We’ve overcome a lot more than just a bad result in this race and now we have two legs left to put our best foot forward and end on a good note.”

Two teams remain on the race course as of 0800 UTC on Tuesday morning. Turn the Tide on Plastic is due to finish in Cardiff later Tuesday morning in sixth place with SHK/Scallywag expected near midnight. 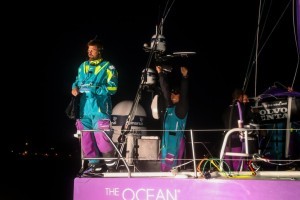 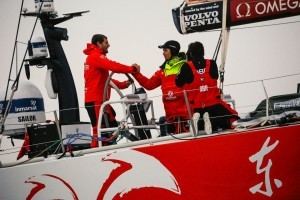 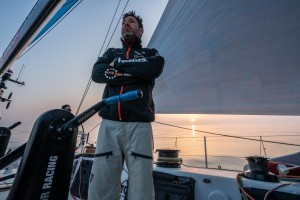 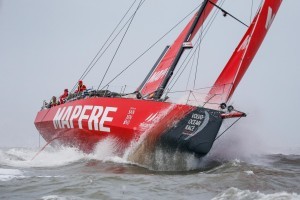 Beneteau- New Oceanis 46.1 shaping the future of a bestseller!