Azzurra solved an early morning problem which might have jeopardised the first racing day of the 2018 season and went on to win the first race for the TP52 class at the 15th Sail Racing PalmaVela regatta on the Bay of Palma. Adding a third from the second of the two races contested today sees the Roemmers family team lead the ten boat fleet by two points from Tony Langley’s Gladiator. As the Melges 40 class makes its regatta debut, Inga from Sweden, steered by owner Richard Goransson tops the five boat fleet by a single point.

In the Swan fleets 2017 Sail Racing PalmaVela champion EarlyBird, which has Jesper Radich as tactician this week, has the early lead among the seven ClubSwan 50s, as does Elena Nova in the Swan 45 class and Selene in the ClubSwan 42s.

The Wally fleet raced a 32 nautical miles coastal race to Santa Ponsa and back which was won by J-One, the smallest Wally in the class. The IRC class, racing on the same course as the Wallys, saw Andres Varela Entrecanales’ X65 Performance triumphant.

After a delay on the Bay of Palma before a decent sea breeze finally eliminated the offshore gradient wind, the 15th Sail Racing PalmaVela regatta delivered three good windward leeward races for the Melges 40s and for the ClubSwan 50, Swan 45s and the ClubSwan 42s. The TP52 fleet raced two windward leewards which were won by Azzurra, which has Argentina’s Olympic champion Santi Lange debuting as tactician, while Harm Muller Spreer’s World Champions on Platoon won the second race. They were over the start line early in the first race but the German owner confirmed he is very pleased with his new Platoon, the only Vrolijk design among the seven new near identical Botin designs which together all contested their first ever races today.

Perhaps it is significant that the top two TP52s have had the longest time on the water. Langley’s Gladiator was launched as Interlodge at the back end of the 2016 season in preparation for last year, while 2017 circuit champions Azzurra launched on March 13th and have trained on the Bay of Palma where their boat is based at Puerto Portals. Even so they prudently recognised a problem with the mast base this morning and had to draw the rig out at 0730hrs, not the pre-race programme they had planned for!

Lange is not short on TP52 experience but affirmed before this morning’s race that he felt pressure to perform, stepping into the shoes of effervescent Italian Vasco Vascotto who has joined the Luna Rossa America’s Cup project. Azzurra profited on the last run to pass Andy Soriano’s new Alegre and Hasso Plattner’s new Phoenix which has Ed Baird as tactician and take first blood of the season. In the second heat Platoon atoned for jumping the start gun early in the first race with tactician John Kostecki showing his trademark assured, steady percentage sailing to win their first race in the new boat. But Gladiator – which has Adrian Stead guesting as tactican – posted a consistent 4,2 to lie second.

Azzurra’s Lange reported: “The most obvious thing out there is how tight the fleet is and how details make the difference. Today was a good start for us. I think our boys did a really good job keeping us fast which got us out of tight situations. It is all about not making mistakes. I don’t know how the other boats are but right now the speed seems very, very close between the boats. You need to be spot on. I feel our boat was going good today. And it is such an honour to sail with the Azzurra team.”

Skipper helm Guillermo Parada added, “We would like to win overall here, but today this was especially for the shore team, for the boatyard. For sure it is a big relief today. We were doing well in the practise races but this is the first ‘official’ day of racing for the boat and it is good to see us going well. It is a big reward for the shore team. We had a big problem this morning with the rig and they worked very, very hard to get us out there. We had to pull the rig out at 0730hrs this morning we had a problem with the mast base so we finished with the boat at 11 and had wanted to dock out at 1015 and so we were obviously late. But, otherwise we could not have raced today, so thanks to the shoreteam and of course to the Roemmers family for giving us the opportunity again to be launching a new boat and to be racing here.”

The Melges 40 class had three different winners in each of the three races, Inga – which has Cameron Appleton calling tactics - winning the first contest. Valentin Zavadnikov’s Dynamik Synergy won the second race and the third went to Alessandro Rombelli’s Stig. Inga’s enthusiastic owner Richard Goransson commented, “There is obvious improvement progress in terms of speed and angle upwind. The Melges 40 fleet proves to be very close and even, each race is a story in itself and this mix of top performances of the Melges 40 and the high technical level of all the teams makes this Class unique for me.”

The ClubSwan 50 has seen a notable growth since debuting here last year, seven of the Juan Kouyoumdjian one designs racing compared with three last year. Even with the absence of usual tactician Jochen Schümann – who is engaged elsewhere as tactician in the Wally fleet – Henrik Brandis’ EarlyBird is leading, scoring 1,2,1 today. Owner-drive Brandis said: “The wind was relatively stable. Having good starts was important and there was a general trend to be on the right side. I think we were fortunate to be on the right side when we needed to be. I think the class is growing nicely. We were three boats here last year now we have seven and had 11 at the Nations Trophy and I expect more at the Copa del Rey and the Swan Cup where I hope to see 15 or 16 boats. The teams are getting better, some have trained every second weekend all the way through the winter.”

J One which won here two years ago made the best start in the Wally fleet. The evergreen 1997 Wally 80 design, which has Jens Christensen as tactician, was blessed with a building breeze later in the coastal race to win on corrected time. Boat captain Piers Richardson helmed today but the owner will steer from Friday onwards. Richardson concluded: “We could not really see the others because they were so far ahead but we know we sailed a good race. It was a long course. The wind dropped out for us but then came in in the direction we expected and we were quite lucky at the bottom off Santa Ponsa, we rounded the mark there in good breeze and we had an increasing breeze to bring us back up to the fleet a bit. We sail well with a good team.”

Six more classes will increase the regatta fleet by 80 boats on Friday, the second day of racing at Sail Racing PalmaVela. The forecast is for rain which may make the wind conditions tricky and challenging. 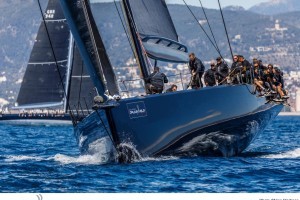 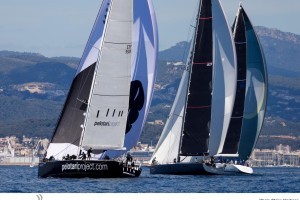 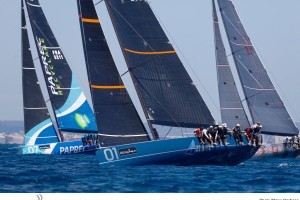 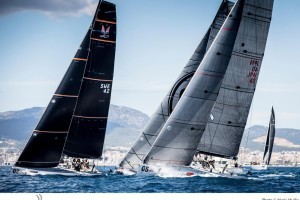 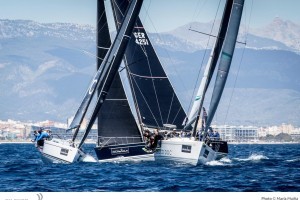 Melges 40 at the Center of 2018 PalmaVela Racing Excitement

Absolute Yachts, an international Made in Italy success