A great day of sailing again today for the crews involved in the race and for the spectators following the action from land. The last leg of the course heading for the finish saw the yachts passing close under the Portofino lighthouse, a thrilling and adrenaline-charged parade that quickly became the cover of Day two. Things out on the water were more complex than the previous day: seas of more than 2.5 m were running while the wind, a south-easterly, was not as steady as in the first race. At the start 10/12 kn which fell halfway through the race and then came on strong towards the finish, with the yachts heading for the line under the cliffs of the promontory of Portofino.

The 15 maxis in the Regate di Primavera – Splendido Mare Cup tackled the course of about 14 miles, a large triangle in the Gulf of Tigullio, in a little under two hours. The first across the line in real time was as usual Carlo Alberini's Pendragon three minutes ahead of Rinaldo Del Bono's Capricorno with Luciano Gandini's Twin Soul B crossing the line a few lengths behind.

The ranking in compensated time after two days of racing is led by Rinaldo Del Bono's R/P 78 Capricorno, thanks to two important victories. In second place Luciano Gandini's fast Mylius 80, with the second and third place in the first two days. Moving up well in the overall rankings was ITA102, Adriano Calvini's Felci 61 which, after a sixth place yesterday and an excellent second today, completes the trio leading the provisional rankings.

Here are the complete rankings: https://www.racingrulesofsailing.org/documents/1738/event

On land and sea the TV studio follow the lives in streaming coverage on the official channels of the Yacht Club Italiano and on Primocanale with technical commentary by Matteo Cantile and Roberto Ferrarese. Auditel audience data this morning confirmed 48,883 viewers following the first day of the Regate di Portofino live on Primocanale from 10 AM to 2:30 PM. The average share was 3.98% and it peaked at 9.42%.

Racing will continue tomorrow at 11 AM for the third day of the Regate di Primavera – Splendido Mare Cup, in calmer conditions with waves dropping and a light south-westerly. 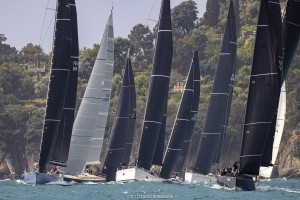 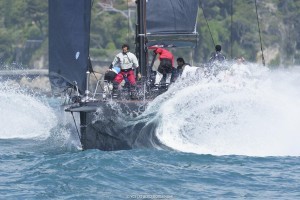 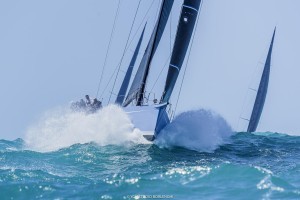 The AC Defenders have rebuffed the surprise Challenge by the NYYC