Another festival of close competitive racing at the Swan Tuscany Challenge today saw race leads and class leaders change, and then change again as the ClubSwan Racing teams battled it out for places and points on the Gulf of Follonica off Scarlino.

With the final day looming the pressure was on to gain a foothold at the top of the leaderboard, though the results revealed that consistency was hard to maintain given the level of competition in the evenly balanced one-design fleets.

The first race in the ClubSwan 50 class - which was brought forward an hour by the experienced race management teams of Yacht Club Isole di Toscana and ClubSwan Racing - saw Graeme Peterson's Moonlight add her name to the winners' roster. Meanwhile Marcus Brennecke's Hatari moved to the top of the table thanks to her second place, although only on countback being level on points with Cuordileone.

Then the next race also almost delivered a new winning team, only for Alberto Franchi's Giuliana to be pipped at the post after leading the fleet around the course by Stella Maris - August Schram's crew taking their third win at the Swan Tuscany Challenge to return to the top spot.

As if to highlight the varied fortunes at the heart of one-design racing, in the next race both of the earlier race winners - Moonlight and Stella Maris - started early and had to go back to restart. Their luck swung back when a major wind shift saw the race abandoned.

After the restart the variable wind saw the lead change hands several times, with Giuliana this time holding off Balthasar and Stella Maris to take a well-deserved first victory at the regatta when the course was shortened at the top mark.

"Today was a great day for all the crew - we have the set-up of the boat right now, and we have found solutions on how to win races," said Franchi. "It's a fantastic class and very competitive."

Stella Maris ended the day at the top of the table, though only two points clear of a strikingly consistent Hatari who delivered a 2-3-4 scoreline. Cuordileone, helmed by Leonardo Ferragamo is in third spot going into the final day, a single point ahead of Giuliana, whose 5-2-1 results made her the day's top boat in the ClubSwan 50 class.

"One of the things about these races is that there are no discards so consistency is key, and it's really about just getting the best results throughout the regattas.

"This is great racing to come into having done the offshore circuit, it's really nice to be doing some short, fast, intense racing. But it's a really strong fleet and we'll be hoping for, let's say, a top-five position by the end of the season."

The tight nature of the racing was also highlighted by the Italian Olympic and America's Cup sailor Tommaso Chieffi, tactician on Giovanni Lombardi's Django, at the foot of the table.

"We go around very short courses 1.6, 1.7 miles and the boats are altogether until the end, so you can finish first or last in the last 500 metres of the race," Chieffi observed.

"Sailing is supposed to be enjoyable, we're all very competitive, so we get frustrated when we don't achieve a result, but it is good to be here and to enjoy the competition, and if a bad day comes the next day could be better."

In the ClubSwan 36 class the leading trio are covered by a single point, with Haakon Lorentzen's Mamao - the third occupant of the top spot in three days - level on 23 points with overnight leader Giangiacomo Serena di Lapigio's G-Spot after an impressive 2-1-2 scoreline.

"The only surprise is that we are doing so well, and I didn't know we were at the top," said Lorentzen, who has raced with his largely Brazilian crew for 10 years. "But every day is a different day, so we'll see tomorrow."

Mehmet Taki's Turkish-flagged Facing Future is just a point behind, with a nine-point cushion back to Edoardo Pavesio's Fra Martina and John-Christian de Champs' Cuordileone, tied on 33 points apiece.

"Tomorrow we will fight to defend our fourth position but we will have to do better than today," said Pavesio. "The competition is very tight - you can see from the results that in eight races we have had five different winners, so any race can change the ranking. This means that the fleet is on a very similar level and the level of the competition is very high."

Winning or not, owners and crews are revelling in the conditions off the Marina di Scarlino, the home of Swan in the Mediterranean, said ClubSwan Racing's Head of Sporting Activity, Federico Michetti.

"I think they are happy - great conditions, very tough and super tricky. The wind is coming from the land so it's very shifty, and at every upwind and every downwind leg you can see a big turnover in the ranking.

"It is stressful but super fun because it means tight racing among super competitive teams. It's very easy to lose and very difficult to gain, but it is definitely fun. Obviously, whoever is losing is not so happy, and whoever is winning is super happy, but I think that is sailing, and it shows how healthy our one-design classes are."

Off the water the main attraction of the evening is the Crew Dinner Party, held in the Il Tarantella pool bar and sponsored by Banor Capital Ltd, a partner of the ClubSwan Racing 2022 One Design circuit. The party will also include wine tasting courtesy of Ferrari Trento, the event's Official Sparkling Partner.

The daily prize-giving saw awards presented by Randstad with a special award from Ferrari Trento, both also ClubSwan Racing partners. 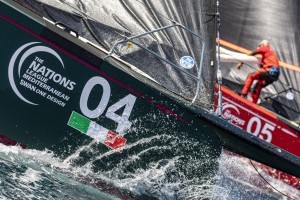 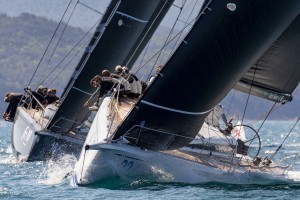 MYS, a proper introduction to world of superyachting