Almost eight years on from 2010 when its radical designs first revolutionised the international nautical market, ARCADIA YACHTS’ talent for making each new model absolutely unique and inimitable continues to astonish.

A perfect example is the ARCADIA SHERPA PANTA REI III whose owner expressly asked the yard to paint the hull in the same iconic Silver Sand colour as his Rolls Royce. Starting with nothing more than a paint sample from Rolls Royce, ARCADIA YACHTS and its nautical supplier spent two months meticulously working to produce a paint that guaranteed the kind of chemical stability required to stand the test of time in the marine environment. That huge effort was rewarded, however, by the owner’s instant thumbs-up, confirming the yard’s ability to consistently put the owner’s requests at the very heart of each project.

The centrality of the owner and his direct and constant relationship with the surrounding environment underpin the Yachting Renaissance concept brilliantly illustrated by the launch of the first A85 seven years ago and formalised in recent months.

Arcadia and the yachting reinassance

From its earliest days, ARCADIA YACHTS has taken each individual owner and the use they intend to make of their boat as the starting point to putting flesh on their ideas and wishes. Owners’ requests and needs are carefully listened to, taken onboard and then used to turn dreams into glorious reality.

Sailing the seas aboard an ARCADIA is a completely different emotional and practical experience: it is no longer simply an opportunity to be gently rocked by the waves and admire the natural world from a very privileged viewpoint. Arcadia Yachts’ craft bring owners and guests into very close contact with the surrounding seascape from practically any angle, both interior and exterior.

The yachts boast large open deck spaces that go well beyond the average size and totally immerse passengers in the marine environment, so that yacht and sea seem to meld into one seamless entity. Almost as if they were natural extensions of each other.  The confine between exterior and interior blurs and becomes almost imperceptible as the enclosed spaces seem to open up and become part of the natural world.

This 60’ yacht brilliantly epitomises the concepts and characteristics that set every ARCADIA  apart from its competitors, thanks to a whole new approach to space distribution aboard that puts the emphasis firmly on convivial areas.

The hull’s classic lines were inspired by the working vessel aesthetic and integrate with the craft’s other elements, including the superstructure, lightening and modernising the profile. The superstructure, in fact, is supported by side frames that run parallel to the stairs all to the sky lounge with a striking sense of harmony. This creates an interplay of lines that never obscure or interrupt the sense of contact with the sea.

To ARCADIA design is much more than an aesthetic exercise as an end in itself. It must always be functional to assure the owner and his guests maximum comfort. The superstructure, for instance, opens aft into two side tails that make the yacht instantly recognisable and also incorporate extra solar panels. This in turn means reduces generator usage, so that the sounds and smells of nature are more available to everyone aboard as the yacht rides at anchor.

The superstructure also fulfils another function: it extends the shaded area of the main deck, providing shelter to the guests who can relax on a large aft-facing C-shaped sofa which is echoed by two other sofas that can convert into extra sun pads amidships on the main deck. Moving aft, the emphasis placed by ARCADIA on the close relationship between man and nature becomes even clearer: guests only have to go down a single step at the sides of the large sun pad area and they’ll find themselves at water level.

This is essentially a fantastic 50 square metre sea-skimming terrace and to ensure it remains both warm and welcoming on balmy summer nights, the yard has added pop-up Secret Light L low-energy lights (just 6W – so generators don’t need to be running) in the bulwarks. These hideaway neatly but turn on automatically when popped up and provide 360° lighting that beautifully enhances the all-teak deck and the Sunbrella No Limits fabric used to upholster the outdoor furnishings.

In yet another move to blur the boundaries between indoor and outdoor and create the sense of a single environment, the ARCADIA SHERPA  features the striking Easy To Close sky lounge which, as the name suggests, can convert to an enclosed space protected by side windows that rise all the way up to the hard top. In other words, the SHERPA’s upper deck is, to all intents a purposes, what would be called in the car world, convertible.

As it is air conditioned this area is wonderfully versatile and useable in all kinds of weather and climate conditions. The up&down windows can be raised when it is very hot or the weather is bad or lowered so that guests can enjoy the natural sea breeze.

Aside from a convivial area and the helm station with its carbon-fibre wheel, the sky lounge also has a galley unit finished in the same glossy Silver Sand paintwork, offering a steel double sink, a fridge and a Bosch induction hob.

Moving indoors, we find the same muscular forms that characterise the exterior areas, albeit softened by the sophistication of designer flourishes such as a Jacaranda Chapatur carpet hand-woven from natural fibres. The layout features a very generous master suite complete with a roomy closet and a bathroom that is virtually a personal wellness area in its own right. Once again, the latter is extremely generously-sized compared to the model’s competitors and aft both floor and bulkheads are trimmed in dark oak finished with a transparent gloss varnish.  The hand basin and shower tray are made from Calacatta marble while the large shower itself is edged in Emperador marble. Arcadia’s signature attention to detail is clear again in the decision to trim the head rest of the bed, bedside tables and perimeter area in exclusive Frau leather and to use Nasketta Cromo lamps by Fontana Arte for the aforementioned beside tables in an effortless melding of function and haute design.

A second cabin with twin beds has a ceiling height of 2 metres too. Lastly, there is also a guest bathroom with separate shower. It can double as a day toilet as it has separate access, guaranteeing complete privacy to the cabins.  This bathroom and the master bath share the same hardware, hand basin, bidet and shower by Zucchetti and a ceiling trimmed in grey tinted Europa mirrored glass.

The yard then researched a series of other solutions which it has developed still further with the individual owners. One includes the possibility of having just one master suite with a modular saloon/lounge area equipped with sliding panels that can separate off different areas, or equally a three-cabin version.

ARCADIA’s skill in adapting established reliable technologies and making them even more efficient is also highlighted by the use of the hull derived from the semi-planing NPL series which has been extensively tested and honed since it was first introduced in the 1960s. In this instance it is coupled with Volvo Penta IPS600 engines to deliver extremely low fuel consumption and superb manoeuvrability resulting in exceptional onboard comfort. 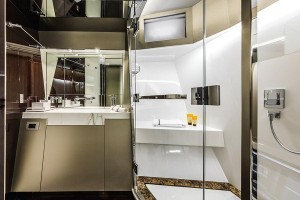 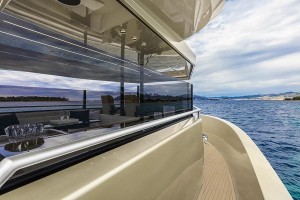 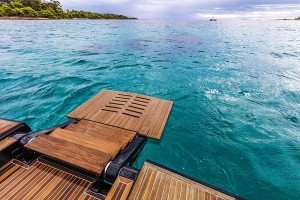 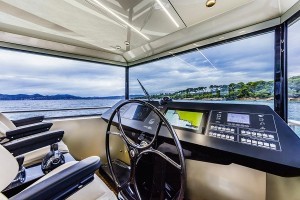 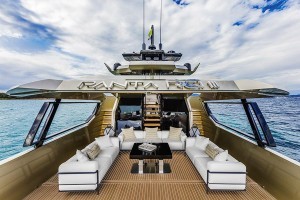 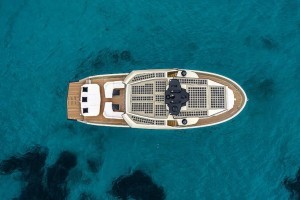 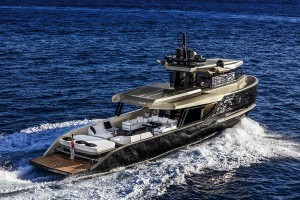 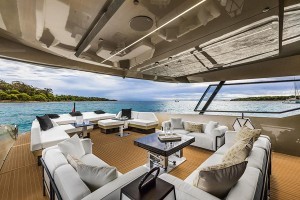 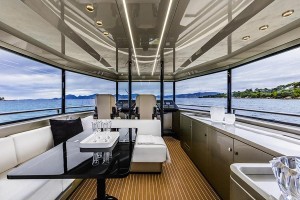 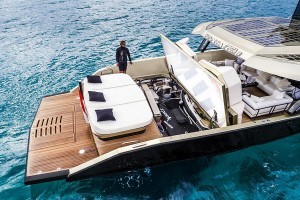 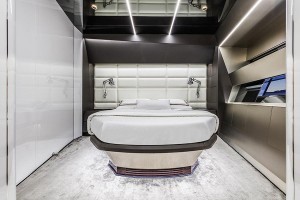 Riva 90’: the third model in the new Flybridge fleet

Volvo Ocean Race: a roll of the dice in the South Atlantic

The new Bavaria SR33, the latest premiere of the successful SR-Line