14 December 2020 - Leader of the Vendée Globe since 23rd November, Charlie Dalin has this evening reported damage to his port foil system.
While sailing in the southern Indian Ocean some 900 miles south west of Tasmania at around 1800hrs UTC and leading the fleet by some 65 miles, Dalin heard a loud noise and immediately slowed the boat to assess the situation, discovering damage to his port foil system. Dalin called his technical team immediately.  On first inspection, the APIVIA skipper noticed that the port foil system was damaged. He did not report any water ingress.
He and his team are reviewing the level of damage and repair options.

Some 12 days days after hitting an object which damaged the keel housing structure on Initiatives Coeur and so forcing the end of her Vendee Globe, Sam Davies has set out this afternoon from Cape Town, South Africa to complete her adventure, seeking to finish the course but outwith the race. At around 1500hrs UTC Davies bid farewell to her technical team and all those who have worked round the clock to repair her boat and set sail to return to the famous three capes routes, with the objective of getting closure on her personal story and continuing the inititiave to save children with heart problems.

For each new fan or share on Initiatives-Cœur's Facebook and Instagram accounts, the boat's sponsoring partners (Initiatives, K-Line and VINCI Énergies) pay € 1 to the Mécénat Chirurgie Cardiaque association, which brings children from disadvantaged countries with severe heart defects to France to operates on them. Since the start of the Vendée Globe, 37 children have already been saved thanks to this initiative called 1 click = 1 heart and to the generosity of the public, whose donations are significant. The goal is to save 60 children knowing that each operation costs € 12,000.

After several days and nights of hard work, the shore team of Initiatives-Coeur put the boat back in working order. Davies set off to crorss the Cape of Good Hope (for the third time in three weeks) which opens the course to Cape Leeuwin and Cape Horn. Davies follows a line of 12 skippers who have completed the course outside the race. Among the big names of these adventurers are Patrice Carpentier in 1990, Isabelle Autissier in 1997 and Bernard Stamm in the 2012-2013 edition.

She continues her passage under the watchful eye of the Vendée Globe race direction who wil track her and watch her progress. But as she is outside the race Initiatives-Coeur will be visible on the Vendée Globe tracking only in a "ghost" mode. We invite you to stay up to date on the project's internet page, www.initiatives-coeur.fr, and to follow on their networks Facebook or Instagram. By clicking or sharing these pages, you will contribute to the solidarity project that motivates the British sailor. 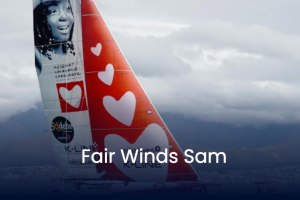 TecnoRib is proud to announce launch of the first Pirelli 35

Boot exhibitors call: take advantage of the opportunity in April 2021