M32 Pendulum swings to Europe for the 2022 World Championship

After the focus on the American fleet for the Miami Worlds in 2021 the pendulum swings back to Europe for the 2022 World Championship in Portugal. After the Miami Winter Series wraps up the US fleet heads to Newport for the Midtown Cup with three events in June July and August, the last event is scheduled to allow for shipping of the fleet from the US to Portugal. In Europe the fleet will enjoy three training events in Italy before the series starts in May on lake Garda, The fleet then heads north to Holland and Marstrand to end back on Garda for the Europeans before the grand finale of the year, the Worlds in Cascais, Portugal, October 3-9.

A strong fleet of more than 10 M32s will participate in the 2022 Miami winter series.  After a successful Miami World Championship in November, the growing fleet is keen to get going again February 4-6. The winter series and the fight for the infamous Rooster Trophy consist of three events ending in April. Teams are typically using the more relaxed format of the winter series to try out new crew constellations and setups, and of course, enjoy the superb sailing of the Biscayne Bay and the nightlife of Miami.

Back in action is team Extreme2 with skipper Dan Cheresh and tactician Morgan Larson. Dan who has taken a few months off sailing is energized to get back at it; "The Team is looking forward to shaking the dust off and heading to Miami for the Winter Series next month. The schedule this year in Miami will be more relaxed and it'll be a great way to get through the winter months and prepare for the events in Newport this summer and the World Championship in Portugal this fall. We are Looking forward to sailing against the very best teams on what I think is the best class in sailing today!"  Extreme2 has a refreshed team and a focused vision for 2022 and beyond.

The Road to Cascais
The European teams are gearing up for the season and several American teams want to join the circuit rather than just doing the Worlds. "With 6 events in the US and 8 in Europe we have a great schedule and great venues for 2022" comments Class Manager Mattias Dahlstrom and continues "With events in bucket list places like Riva, Marstrand and Cascais it's not hard to convince US teams to come over."

"Easy to get in, a lot of nice people, a lot of socializing going on" comments Richard Goransson from team Inga from Sweden with tactician Chris Draper. Team Inga, overall Bronze medallists at the Worlds in Miami, will compete in the Miami Winter Series before returning to Europe where they will join the 5 other regular European boats (Vitamin Veloce, Vitamina Rapida, Vikings, Leeloo and Warrer Racing) for the European season. There are also new owners joining the circuit including Bruno Zorzan, with a background in the A-cat class, who has just acquired an M32. Being based on Lake Garda he looks forward to joining the fleet for the season start in Riva, at the very north end of the lake.

In addition several American teams, after experiencing what Lake Garda has to offer at the Worlds in 2019, intend to compete in the European Series this year as they build up to the season finale in Cascais.

Class President, Ian Williams, commented "One of the great things about the class is how easy it is for teams to cross the Atlantic to compete.  Some owners choose to have 2 boats, some charter, and some ship their equipment across. The beauty of the M32 is that all those options are available, relatively cost effective, and still allow teams to be competitive.  It helped us have great racing with 11 boats at the 2021 Worlds in Miami despite the challenges with COVID-19, and we anticipate having more teams in Cascais for our World Championships in 2022"
American Teams already planning to compete in one or more European Series regattas prior to the World Championships include Bliksem, Gravedigger, Pursuit, and Surge.
The M32 Demo Boat

The majority of the M32 Fleet got their feet wet in the class via the M32 demo boat. Jakob Wilson heads the M32 Academy and demo boat program. An accomplished high-performance sailor and competitor on the World Match Race circuit, he specializes in running the M32 Academy, a personalized clinic tailored to each team's skill set. Jakobs has been with the M32 since the beginning and has been sailing with most of the sailors on today's series. "We have a well-developed program which transits keelboat sailors to multihull sailors. A small 4 person sports boat team, typically J-70 or Melges 24, shows up for a 2-3 days clinic. With the focus on the safety and the essentials of the M32 and multi-hull sailing, we can during a weekend get sailors, owners, and teams up to speed to compete on the M32 series" says Jakob. The M32 builder, Aston Harald, has committed to having a demo boat available on all events this year including the early season coordinated training sessions in Italy.

The sails for the M32 are strictly one design and manufacturer controlled. For the 2022 season, a new North 3DI Helix gennaker was developed through testing by teams in Europe and the United States.  North and their team of designers modeled and built several test sails, which we then handed to teams to evaluate through the 2021 season.  North then collected input from the fleet to develop the final design.  The upgrade gennaker with Helix technology looks to continue the performance envelope of the existing sail designs with improvements in the competitive longevity of the material.  The fact that there is not a sail design war in the class keeps the costs down and keeps the racing focused on the sailors which is a major attraction to teams.  "When it comes to developing a new product for the class we draw on the knowledge of the talented sailors racing in the class to make the right decisions."  Dave Doucett M32 NA. The new sail will be demonstrated in February and the order process presented where there will be at least two occasions to get your sail orders in this year. 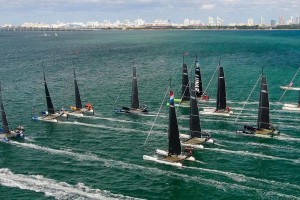 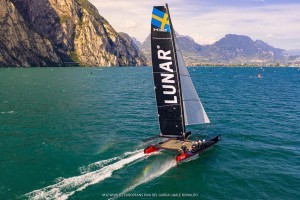 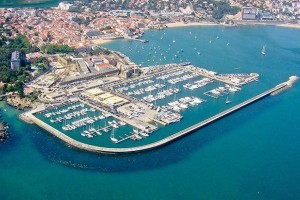