The 2022 eSailing World Championships have kicked off with players around the world battling it out in the season opener in the Bay of Cádiz, Spain.

Thousands of eSailors have competed to get a head start in this prestigious event, which will see weekly regattas on the world’s most popular boats as well as a number of new high profile events to be launched this year, on the back of last year’s success with the Olympic Virtual Series, eAmerica’s Cup, eSailGP and the Hempel World Cup Series regattas.

A host of brand new venues will also be revealed, as well as the possibility of national rankings via the World Sailing Member National Associations – and there will be multiple opportunities to advance to the later stages of the Championships at the end of September.

A total of forty sailors will make the grade for the semi-final at the end of October, with just ten sailors heading into the Grand Final in early November competing for a USD $10,000 prize pool.

“The eSailing World Championships have become a huge successful strategic tool to promote our sport since launching in 2018,” explained Scott Over, World Sailing’s Commercial Director.

“We’re looking to engage even more eSailors this year by introducing new events, classes and rankings via our Member National Associations.

“Our 2022 season is also providing more structured competition and opportunities to race, regardless of whether you are new to the game or a veteran looking to climb up the rankings and win trophies.”

Last year’s eSailing World Championships Grand Final was won by 19-year-old Carlos Parejo (UOL Carlos Parejo) of Seville, Spain, who crossed the finish line surrounded by his family. This year he is back: “I really hope to qualify for the Grand Final again this year – I know we’ll have tough competition!” he said.

“This all started when physical regattas were no longer possible due to the pandemic. eSailing has helped us to stay connected to sailors all over the world and we are very excited about our partnership with World Sailing into the future.”

The 2022 eSailing World Championships is available to play on Virtual Regatta Inshore and available on Desktop, iOS or Android. 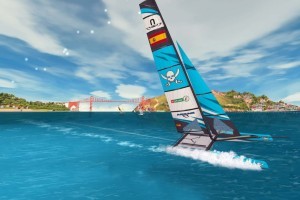 Persico Fly40 now in production. Pininfarina is on board

Navigators plot for the 13th edition of the RORC Caribbean 600

France and Great Britain will compete in the eSailing Nations Cup

World Sailing has partnered with the GWA and the IWSA