Genoa, June 7, 2021 – As a stopover partner of the Ocean Race Europe, set to reach Genoa from 16 June, Persico Marine has set aside a space for members of the public and crews, to enable them to learn all about the company’s evolution, research and development operations, technological innovations and sustainability projects, as well as about the history of the great boats it has constructed – vessels that take center stage in the Ocean Race itself, in the other famous around-the-world regattas and in the America’s Cup.

Marcello Persico, CEO of Persico Marine and Vice President of Persico Group, comments: “It is the first time that the boats contesting the Ocean Race have come to Italy, and here at Persico we have strong links to this event. For twelve years now we have been working with the organizers, and we have built all of the VO65s competing in this event and one of the IMOCAs – as such, we couldn’t fail to take part. We want to welcome the boats and the crews that are sailing them today, looking together towards the next edition of the crewed around-the-world race. It will be great to see the IMOCAs and the VO65s sailing together”.

Out of the twelve boats participating in TOR Europe, eight were made by Persico Marine: all seven of the VO65s, built between 2014 and 2018, as well as Linked Out, one of the IMOCAs taking part, which was one of the stars of the latest Vendée Globe with Thomas Ruyant at the helm.

Persico Marine and The Ocean Race – The link between the Ocean Race and Persico Marine began a full twelve years ago. In 2010, Persico Marine engaged for the first time with the most famous crewed around-the-world race of them all, by building (for Azzami - Abu Dhabi Ocean Racing) an innovative, Farr- designed VO70  that would go on to compete in the 2011-2012 contest.

The next edition, held in 2014-2015, saw Persico Marine very much in the spotlight, as part of the consortium commissioned to build the hull, the appendages and all of the key components of the new monotype VO65s, once again designed by Farr Yacht Design.
A full seven monotype VO65 yachts were there for the start of that edition, and in 2015 Persico played a key role in getting Team Vestas Wind back into the race in record time, after it had run aground along the coast of a small island in the Indian Ocean, with the repairs carried out rapidly thanks to flawless teamwork and logistics, which enabled the boat to rejoin the regatta on the Lisbon leg.

The 2017-2018 edition is recent history in terms of the around-the-world race, and on that occasion Persico Marine created a new VO65 for Team AkzoNobel, while also supplying the entire class with new rudders. The boatbuilder also ensured its own staff were on hand to provide support to the teams on the individual legs. In 2018, Persico Marine was responsible for the record-time repair of Vestas 11th Hour Racing after a collision with a fishing boat off Hong Kong. To get the team back into the race on the Auckland leg, the Italian company built a new section and shipped it to Auckland before installing it on site.

Thanks Genoa – As Marcello Persico states: “The strong ties that we have with the organizers of the Ocean Race, and with all of the teams and the shoreteams, lead us today to Genoa. I would like to thank Richard Brisius, CEO of Volvo Ocean Race, Genoa Mayor Marco Bucci and all of the members of the organizing committee for their farsightedness and for the opportunity to host here in Italy what it such an important event for sailing and, indeed, for our entire industry. The Italian entrepreneurs and institutions participating in the America’s Cup and now also in the Ocean Race are driving sailing forward, and are crucial for the thousands of associated jobs in engineering, design, construction and performance research, uniting these strategic areas with the matter of sustainability”.

Sustainability – Persico Marine’s journey to Genoa will constitute something of a trip back into its own history, retracing the development and rapid rise of the boatbuilder over recent years, particularly in relation to its sustainability projects. As Marcello Persico comments: “For us, working over several years with the organizers of the Ocean Race has been a source of inspiration, and not just in technical terms: our whole focus on sustainability has enabled us to concentrate on what are central issues for us as a high-tech boatbuilder with an ongoing commitment to performance research. Out of this research have come our projects on carbon recycling and the circular economy, as well as the implementation of strategies to reduce the environmental impact of our production facilities”. 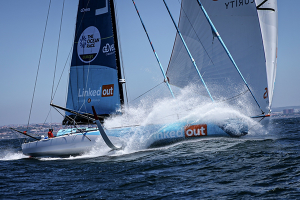 Casiraghi and Harrison set to take off the first Persico Fly40

Persico Fly40 now in production. Pininfarina is on board