Between May 30 and June 3, the French town of Antibes plays host to a fleet of some of 80 vintage sailing craft for Les Voiles d’Antibes, the first round of the 2018 Panerai Classic Yachts Challenge Mediterranean Circuit. This is the 14th consecutive year that the leading international series for these Grandes Dames of the Sea has been sponsored by the Florentine luxury sports watch maker.

The world’s most beautiful and admired wooden sailing yachts will be doing battle over four regattas between June and September – two in Italy and two in France – to decide the winners of the coveted season trophies in the Big Boats (over 30 metres), Vintage (launched pre-1950) and Classic (launched 1950-1975) categories. Antibes will also be hosting the Spirit of Tradition category, which comprises more recently-built craft whose lines and characteristics are inspired by designs of the past, and the Tofinou category. The latter 9.5-metre cruiser-racer one design penned by architects Joubert-Nivelt is particularly popular in France, in fact.

On Wednesday, May 30, the fleet will gather in the old port at Antibes with racing beginning on Thursday, May 31. Four races are scheduled in all – one per day, spread over a combination of coastal and triangular courses depending on weather conditions. The prize-giving ceremony takes place after the final race on Sunday, June 3. The public will have access to the docksides each day to admire the yachts moored in the port.

Also at Antibes will be the 1936 ketch designed and built by the William Fife Shipyard, Eilean, restored by Panerai and used since 2009 to promote both its own brand and the classic sailing culture.

The Antibes fleet will span the spectrum from the 9-metre Brynhilde splashed in 1958 to Cambria, the 40-metre Bermudan cutter designed and launched by the hugely influential Scottish naval architectural Fife dynasty in 1928. By coincidence, all of the Big Boats entered at Antibes this year were built by the Fife Shipyard. These include Moonbeam IV (1914), winner of no less than four season titles, Mariska, Moonbeam of Fife, Prince Albert of Monaco’s Tuiga and Hallowe’en (1926), attempting to retain the category trophy she won for the first time in 2017.

Next step of the circuit, Argentario Sailing Week, from 13th to 17th June. 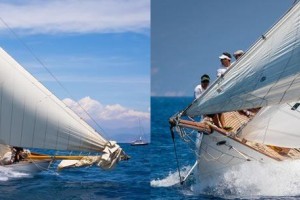