Two races were completed on the first day of competition at the 2017 U.S. National Championship, the third event on the Melges 20 World League, North American ranking

On a traditional sunny, summer day, Newport is known for giving sailors a headfake with a weak, northerly, morning breeze, only to have that fade into a solid, southwest seabreeze. Knowing the conditions well and despite the solid northerly morning gradient, PRO Anderson Reggio wisely postponed the 2017 Melges 20 U.S. National Championship fleet, and settled on a 2 o'clock start on the 'outside' race course to take full advantage of that seabreeze.

Once the wind direction settled into the 200 degree heading, Reggio got the fleet underway to kick off the 2017 National Championship. Judging by the first top mark rounding, it was clear that some Melges 20 teams have upped their game as the majority of the fleet arrived to the first windward mark overlapped. Showing no signs of slowing down from their European Championship victory a few weeks ago, Vladimir's Prosikhin sailing on RUSSIAN BOGATYRS took the bullet in the first race, followed by Liam Kilroy on WILDMAN in second and a very fast Jason Michas on MIDNIGHT BLUE in third.

With the seabreeze hovering in the 9-11kt range, Race Two started clean and making no mistake about his intentions, Drew Freides and his team on PACIFIC YANKEE started at the pin, extending to the left corner to sail a nice port tack angle and lead at the top mark. Behind Freides, a heated battle was underway with Alexis Michas' MIDNIGHT SUN, former World Champion John Kilroy on SAMBA PA TI , Rob Wilber's CINGHIALE, Michas and Prosikhin fighting for position in the top group. On the final beat, Daniel Thielman's KUAI legged it out to the right side to snag a nice right shift sneaking into third place, behind Kilroy in second and Freides in first.

Teams were grateful for two solid races despite potentially missing out on a marginal morning race in a fading northerly. The forecast for Day Two is for plenty of wind... and rain, but as the Melges 20s have conditions to get up and go, there will be smiles all around rain or shine.

After racing teams were treated to post race cocktails at New York Yacht Club (NYYC) Harbour Court by Melges 20 owners John Bailey and Alexis Michas. There are few vistas more breathtaking than from atop the hill at NYYC, and having the fleet be able to experience this first hand on a beautiful Newport summer evening was very special. Thanks to John and Alexis for making it possible.

Special thanks to goods provided by Farmer Willies Ginger Beer and BoatBrim.

MEDIA AND RACING COVERAGE
As with other Melges 20 events around the world, racing updates will be posted online at the Official Melges 20 Facebook Page. Be sure to also follow the fleet on Instagram, Twitter and YouTube. Tune in for the latest racing information, results, video interviews and photos at melges20.com. 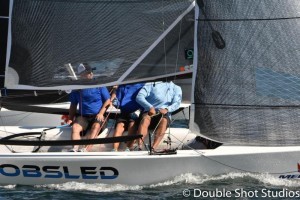 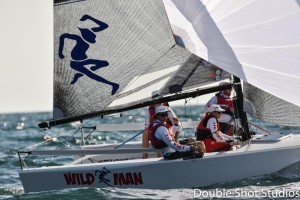 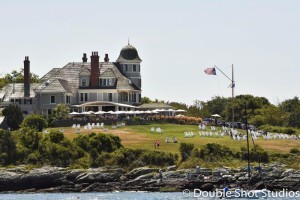 In Puntaldia the double World Championships Melges 20 and Melges 32