Maxi Yacht Rolex Cup: with a day to go, some winners have already been decided

While a Mistral had been forecast for the penultimate day of the 2018 Maxi Yacht Rolex Cup and Rolex Maxi 72 World Championship, the westerly wind edged only into the early 20s making for an exciting rather than terrifying day out on the water for the 41 competitors.

With a day to go, some winners have already been decided at this, the pinnacle event in the maxi yacht calendar, run by the Yacht Club Costa Smeralda in conjunction with the International Maxi Association, the official body that oversees and promotes maxi yacht racing globally. This was the case in the two Mini Maxi classes where, under IRC, Roberto Lacorte and his Vismara 62 SuperNikka claimed Group 1 and Riccardo De Michele’s Vallicelli 80 H20 again won today to maintain her perfect score line in Group 2. Remarkably the Wally 77 Lyra has won the Wally class, despite her owner-driver, Chinese Canadian Terry Hui, sailing not just his first regatta with the boat he only acquired in July, but his first regatta ever.

Today’s most significant victory with a day to spare came in the Rolex Maxi 72 World Championship from defending champions, Dieter Schön and MOMO.

While all the other classes sailed coastal courses up around the La Maddalena archipelago, the Maxi 72s were back racing two windward-leewards today in 14-18 knots and a choppy sea.

MOMO would have finished the event with a perfect scoreline had it not been for making what tactician Michele Ivaldi described as their worst start of the series in today’s second race. Dario Ferrari’s Cannonball reached the top mark in first place and was followed by George Sakellaris’ Proteus, which had attempted to shoot the mark but came to a standstill. This held up MOMO, drawn into a similar state as she tried to keep clear. Cannonball was left to claim her first race win of the Championship.

Nonetheless MOMO had done enough to secure her second consecutive World Championship title. “We are very pleased - the whole team is happy. Overall we’ve had a very good season,” said Dieter Schön. “Winning the last race was not necessary. If you want to win overall sometimes it is good to stay a little conservative. The boat is performing well, but the boat is also sailed very well. If both come together, you get good results.”

Ivaldi added: “It was not as easy as it looked. Cannonball is a very strong opponent and has been optimised quite a bit and they have good sailors. But we had good starts and good calls from the crew on the sails. It was a very good week for the team.”

In the Supermaxi class, the J Class yacht Topaz has won under ORCsy corrected time. She claimed today’s 34.5 mile clock-wise lap of the La Maddalena, that took the fleet northwest beyond the island of Spargi. Considering the extreme cost, weight and momentum of their steed, the Topaz afterguard made some brave calls, notably ‘cutting the corner’ at Spargi and keeping their jib hoisted, despite it developing an alarming split.

Helmsman Peter Holmberg praised Topaz’ Spanish navigator Nacho Postigo. “He put us in corners today that either we had to be crazy or damn good to call it that close. But he did a great job and it worked out well.” Holmberg added that a lot was down to looking at the forecast beforehand and predicting correctly that the wind would be more 15-20 knots than 20-25. This had enabled them to pick the correct upwind headsail. “Velsheda continues to be the benchmark, but I am really proud of how well our guys are sailing. We have great team work and a good chemistry, pulling off all the manoeuvres and playing the boat as hard as we can.”

The Js own the podium in the Supermaxi class with Svea still able to claim second from Velsheda and having already won against Topaz under the J’s own JCA rule.

The fresher conditions were to the liking of George David’s Rambler 88, the fastest boat competing at the Maxi Yacht Rolex Cup, which today was victorious in the Maxi class, with International Maxi Association Secretary General Andrew McIrvine among her crew.

“Finally we had some opportunity to stretch our legs and we could do 22-23 knots,” explained navigator Silvio Arrivabene of their run back around the seaward side of the La Maddalena islands “When we go upwind, everyone is always close to us and when we go VMG downwind it’s the same, but today we had a stretch at a better angle.” Arrivabene is one of many ex-Alinghi America’s Cup-winning crew on board Rambler 88, including tactician Brad Butterworth, Simon Daubney, Peter van Niekerk, Jan Dekker, Rodney Ardern and Josh Belsky.

In the Wallycento battle within the Wally class, today it was the turn of Lebanese American Charif Souki's Tango to prevail, the crew today celebrating tactician Thierry Peponnet’s birthday.

“The Wallycentos are very close to each other,” said Souki. “One day it is somebody and the next day it is the next guy.” However the dominant boat, currently second overall in the Wally class is Sir Lindsay Owen-Jones’ Magic Carpet Cubed. “They did some work on the boat this summer and they are sailing it very well,” observed Souki of his opponent, adding: “Tango is a great pleasure to drive. It is powerful. The last boat [a Wally 80 of the same name] was underpowered – this one isn’t. We are getting used to it.” 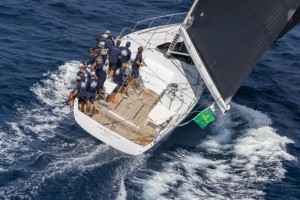 Maxi pain and gain on the Bay of Naples