29th January 2021 - The first day of the PRADA Cup Semi-Final went smooth as silk for Luna Rossa Prada Pirelli which scored the first two points on the leader board against New York Yacht Club American Magic that, against all the odds, managed to make the start line after the Round Robin’s dramatic capsize.

Luna Rossa Prada Pirelli performed two perfect starts followed by two consistent and clean races which they just kept increasing their lead over the Americans who, despite working one miracle by putting PATRIOT back together, couldn’t work another on the water with a tough day playing follow the leader.

With the weather being once again a key player and the SW breeze gusting up to 22 knots at times, a new speed record has been broken today as American Magic hit on 53.31 knots (almost 100 km/h) on race 1.

As the start of the first Semi-final race approached the breeze was up against the stops. The forecast was for conditions to decrease through the afternoon but for the time being there was little evidence of this.

As American Magic entered the pre-start zone it was clear just how breezy conditions were as the American team struggled to keep control as they crossed Luna Rossa Prada Pirelli, a small issue but one that caused problems later in in the pre-start sequence.

As both teams worked their way down into the bottom of the pre-start zone it was Luna Rossa who gained the upper hand when both boats turned back for their approach to the start line.

The Italians were just to leeward of the Americans and in a position where they could control the pace of the game as they prepared to start, holding American Magic up. When Luna Rossa did pull the trigger they did so with perfect timing and led across the start line. American Magic were forced to follow. By the top of the first beat and through Gate 1 Luna Rossa were 18 secs ahead and looking very smooth.

After the first lap Luna Rossa had pulled out a few more seconds to round 22 sec ahead. This was a pattern that continued around the four lap race.

The big change happened at Gate 3 when American Magic struggled during the bear away and lost control temporarily. Their boat had been travelling at 53kts, the fastest yet, but as they came crashing off the foils they were forced to tack around rather than gybe before heading off downwind again. And while they emerged unscathed, the problem had allowed Luna Rossa to pull out a lead of 2min 25sec.

One more lap of the course did little to change anything other than extending the Italian lead slightly further to see Luna Rossa finish 2min 43secs ahead. On the face of it a big loss for American Magic, but for both teams there were positive features to take away from this opening race of the semi-final.

For Luna Rossa their performance had been extremely smooth in difficult conditions, the Italians had clearly upped their game.

For American Magic, getting the boat around the course safely had allowed them to build confidence in both their boat and their ability to bounce back.

In the pre-start this time it was Luna Rossa Prada Pirelli who came in on port tack from the left hand side, doing so at 47knots and spot on time.

Throughout the pre-start the Italians looked confident, executing a strategy to control their opponents.

Meanwhile, aboard American Magic things didn’t look quite so settled with the crew struggling to execute smooth manoeuvres.

When it came to the start, Luna Rossa had once again gained the upper hand, leading into the line with American Magic to windward and trailing.

By Gate 1 Luna Rossa were leading once again by 17sec, a similar margin to the first race.

Just as with the first race of the day, Luna Rossa were delivering a confident, poised performance, stretching their lead and looking on track to deliver a similar overall performance. Until that is, they reached Gate 2.

As they rounded the left hand of the two marks, approaching at 49 knots, Luna Rossa lost grip on their foil and skidded to leeward. There was plenty of spray and raised heartbeats but the crew recovered the situation quickly to get back up to speed.

The slip up had reduced the Italian lead over American Magic, but as the next few legs played out it was clear that there were control problems aboard Patriot with frequent loss of control on the downwind legs. Each time the distance between the two boats only grew, delivering another win to Luna Rossa Prada Pirelli by the finish as they crossed the line 3min 7sec ahead.

Two races in the bag for the Italian team, another two and they would be through to the Prada Cup final, but tomorrow’s weather looks likely to change gear and in doing so may re-set expectations once again.

QUOTES FROM THE RACE COURSE

We are super happy, racing in so much wind is always really good. We are hitting faster speeds every day, that’s what we are training for and why we make improvements on the boats. We are not coming from a great period as we were not up to the standard we wanted, so there was a little bit of tension. In the past the boat wasn’t the fastest in the strong winds, but we knew we had made some big improvements in terms of performance, we saw very good numbers, and today on the water we also felt the difference.

First and fore-most congratulations to Luna Rossa for sailing a great day. As Francesco Bruni said, it was a hard day. We know Luna Rossa is a formidable team, we just have to sail better. Anyway today it felt like a normal race day. We had a good warm up and being so windy the boats are always on edge but to be completely candid with you I wasn’t even thinking this would have been possible about twelve days ago. It is a short Series and we have some meat on the bone here to keep working a way out of it.

The PRADA Cup Semi-Final is the first knock out phase of the Challenger Selection Series. The first team to win four races will face INEOS TEAM UK in the PRADA Cup Final Starting on the 13th of February. One step away from the Match. 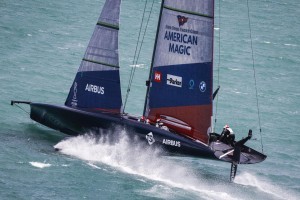 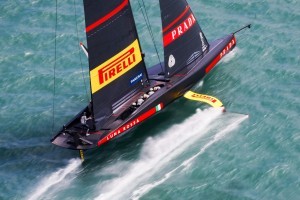 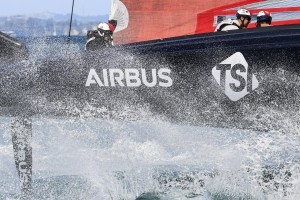 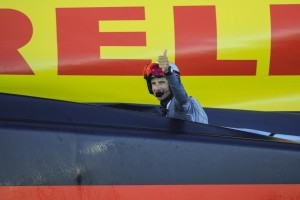 Four wins, Luna Rossa gains access to the final of the Prada Cup

Royal Cup leaders Quantum Racing are back on form in Scarlino

Out of the Blue, Vascotto Lays Down The Gauntlet With Platoon