Prada Cup: A day of ups and downs in wind, foils and points

16th January 2021 - A tricky and yet revealing day for the Challengers competing in the PRADA Cup Round Robins due the to the tricky light wind conditions that frequently forced the AC75’s off their foils.

A positive day for the Challenger of Record of Luna Rossa Prada Pirelli as the Italians took a nerve wracking win against American Magic on the first race of the day to lodge their first point on the board.

The second race of the day, once again was the British challenger INEOS TEAM UK that again surprised many by winning their third race in a row in conditions they were expected to struggle in against the Americans.

It was a tough day for American Magic, with two consecutive losses which Skipper Terry Hutchinson described as ‘character building’.

The pressure mounting, but the turnaround performance for the British team is a clear example as to how fast things can change and nothing can be taken for granted.

As Luna Rossa Prada Pirelli (ITA) entered the pre-start area from the left hand side there were the first few signs that this would be a tricky race. Struggling to stay on their foils the Italian team made it across the bow of right of way American Magic (USA), just. But shortly after this both boats had dropped down into the water and were now very slow.

At 30 sec to go to the start Luna Rossa Prada Pirelli had managed to get back up and running, but American Magic were still dead in the water.

At the start, the Italians crossed the line at speed on starboard from the committee boat end of the line leaving the Americans still struggling for speed coming in on port.

Eventually Dean Barker did get underway, but they were already 250m behind.

In the patchy breeze and when they were fully underway, boat speeds were around 27-28 knots on the first upwind leg. But this kind of pace was short lived. Although Luna Rossa Prada Pirelli were able to get around through the first gate on their foils they couldn’t keep this pace for the entire downwind leg.

As the breeze stayed down at around 8 knots Luna Rossa Prada Pirelli were having trouble getting down leg 2. In their attempt to create sufficient boat speed to get onto the foils they were forced to sail so high that they were sailing across the course rather than down it.

As they continued to struggle, the tables were about to be reversed as American Magic managed to get into some breeze, get up to speed and haul back the massive 700m+ deficit to catch and then overtake the Italians.

But once again, the patchy breeze caused fortunes to be reversed. This time it was Luna Rossa Prada Pirelli who got back up to speed to sail away from American Magic once again. Minutes later they had passed through gate 2 in the lead.

From here, American Magic never got close enough to pose a problem for Luna Rossa Prada Pirelli. As the Italians approached gate 3 they were well out in front, foiling around the left hand mark. But once again, from the on board comms it was clear that their main concern now was keeping on their foils to get to the finish in a race that had been shortened from three laps to two.

The Italians held their nerve, connecting the dots to stay with what little breeze they could find and managed to cross the finish line inside the 45min time limit.

As the sky cleared, so the heating on the land showed hints of the ingredients for a sea breeze as the wind speed climbed slowly towards double figures. The wind direction had also changed slightly causing the race committee to delay the start of the race as they re-aligned the course axis. But once again, the rise in the wind speed was deceptive.

On the pre-start entry INEOS TEAM UK (GBR) were travelling at speed, fully in flight as they entered the zone at speed, on time and on port tack. They crossed their opponents American Magic (USA) with ease who appeared to have got their timing wrong, entering the zone too early and gaining a penalty as well. Even worse they came off their foils and struggled to get back up to speed.

With 30 sec to go, INEOS TEAM UK were at speed burning time on the right hand side of the pre-start area as they headed back towards the line and American Magic who were dead in the water.

Seconds later INEOS TEAM UK tacked onto port, crossed the start line and charged off on the upwind leg at speed leaving American Magic dead in the water.

One minute and 30 seconds later INEOS TEAM UK were 500m ahead of American Magic. Seconds later it was 700m and growing.

As INEOS TEAM UK approached gate 1 there was concern aboard the British boat that it would be difficult to avoid the light patches further up the course. As they rolled into a tack onto port the breeze dropped and the British came off their foils. This would be the first of many splash downs for both teams.

Meanwhile, American Magic were up and running and charging up the beat at 30 knots to INEOS TEAM UK’ 2 knots. But the advantage was short lived as the American’s sailed into the same lull in the breeze.

Boat speeds were now down to 4-8 knots.

Having inched their way down leg 2 INEOS TEAM UK were the first to get onto their foils, but it was a brief moment. One gybe and they were back in displacement mode, sailing like an everyday race boat.

As they did so American Magic had found some breeze and were back up on their foils, closing the distance on the leaders. But it wasn’t enough, INEOS TEAM UK had found a slither of breeze too and were sailing at over 30knots, enough to get them down to gate 2 as they rounded the right hand mark.

The next lap of the course was tense for the race leaders in trying to avoid the flat patches and ignore the moments when American Magic was reeling in the distance.

But as the British approached gate 3 for the final leg, (the had been shortened), the concern was now around whether there was enough time to complete the race.

Eventually, with 7 minutes to go before the time limit expired INEOS TEAM UK found the breeze and got back up to speed. Two thousand metres to go, three and a half minutes left, the British were travelling at over 30 knots, this was going to be close.

In the event they crossed the finish with two minutes to spare to take their third race win from three starts.

QUOTES FROM THE RACE COURSE

“It was very challenging out there. We are very happy, it was one of those races that you can win or lose very easily. It was really demanding for the boys to produce power, it’s harder in the lighter wind than in stronger winds. So, they have done a fantastic job. The boat was always with enough power to pump, to take off and I’m very proud of them.

I think that in the light wind we have an advantage due to our big foils. Actually, it’s a combination of things: we have power in the sails and power in the foils. We definitely like the light wind, but today it was not so much a matter of speed edge but more the ability to stay in the pressure. And I think we did a good job. To keep calm and collected it is by far the harder thing… especially for Italians.”

“It was a tough race given what’s at stake. It was toughest for the grinders, they worked hard the whole time, as today it was much more intense to try and keep the boat on the foils. On every maneuver, if you come off the foils, that might be the end of the race. The guys did a great job handling the boat and also did Giles trying to find the little breeze that it was.

I’m not sure today is an accurate read of our performance because it was so puffy, so shifty, and it was really about just trying to stay in the pressure. We are still not sure with light winds how we stake up, but it’s definitely a huge improvement from where we were three weeks ago. We will see how we go as we get further in the competition, we will keep pushing.”

“We were off the foils on both starts so that left us behind straight away. From there we struggled in the light breeze. On the second race we got similar situation, we were a little bit jammed up on the entry timing and came off the foil. Again we sailed up a good bit, got close at the top and it was about who got the pressure and who got pumped first. From my perspective there is not much to turn around, we must stay patient, trust in ourselves and trust in our team, which we do, and keep chipping along, there is a lot of meat left on this fire, and we will keep fighting.

Statistically, we are sailing in the windiest month of the year, so I think when you design and make decision for your boat, situations like today are character building. On the shore tonight we will have a debrief with the team and make sure we all remain true to ourselves, work hard and keep ready to turn things around.”

The AC36 International Jury has issued its first decision following the opening day of racing in the PRADA Cup after a “Claim of Non Compliance” was lodged by Luna Rossa Prada Pirelli against INEOS TEAM UK in respect of apparent intentional openings in their mainsail contravening AC75 Class Rule 18.1.

The Measurement Committee Report, approved by the Rules Committee as a correct interpretation of the Class Rule, found that INEOS TEAM UK raced Races 1 and 2 while not in compliance with the Class Rule but after consultation with the Regatta Director determined that the non-compliance had not either improved performance of the yacht nor had a significant effect on the outcome of a race.

Based on the Measurement Committee Report and as it was a first Class Rule Offence, the Jury penalized INEOS TEAM UK  the sum of US$5,000 (NZ$7,010.00) to be paid to the Sir Peter Blake Trust (a charity selected by the Jury with the support of COR36 and the Defender) by 25 January 2021.

Tomorrow Sunday 17th of January is the last day of racing for this week, Race 2 of RR2 will start at 3:15 PM NZT weather permitting and will see Luna Rossa Prada Pirelli vs INEOS TEAM UK and it will be followed by Race 3 with the Americans racing against the Italians. The PRADA Cup Round Robins will then resume on Friday 22nd of January with the first race of RR3.

Post race press conference will be held approximately one hour after end of the last race and will be streamed live on americascup.com, Facebook and YouTube.

Race course and exact start time are published every racing day on the americascup.com and on the event social media at 11:00 AM NZT.

For those in Auckland, the race village is open and free to enter from 08:00AM until 10:00PM on racing days and a Pre-Race show to meet the crews is held at 11:00 AM on the main stage on Te Wero Island. 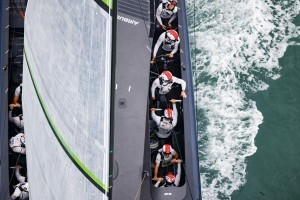 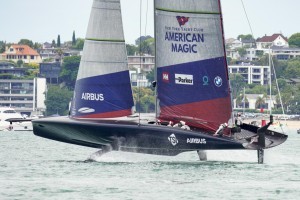 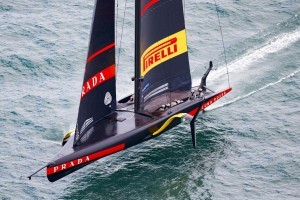 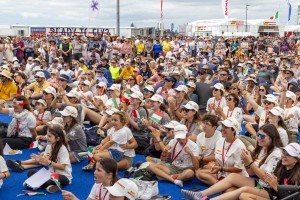 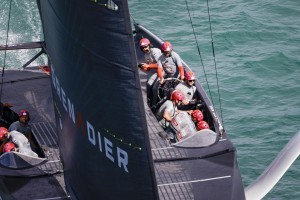 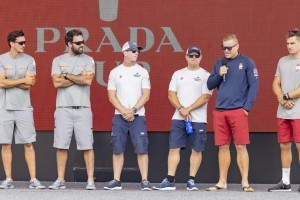 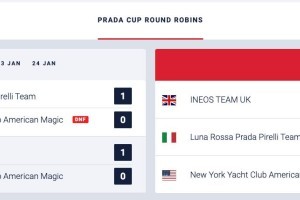 Estonia, Ireland, Antigua&Barbuda and Tahiti qualified to the Final Series

Barcelona, the Host Venue for the 37th America's Cup in 2024