Oyster World Rally: Around the World in an Oyster

The magnificent fleet participating in the 2017-19 Oyster World Rally have bid farewell to Nelson's Dockyard Antigua. In jubilant mood, with a steel band playing, the Oyster yachts slipped their moorings to head out to the starting area for the 2017-19 Oyster World Rally. High above the iconic cliffs, known as the Pillars of Hercules, a single blast of cannon fire signalled the start of the circumnavigation. The Oyster fleet of 31 yachts, from 12 different countries, will travel over 30,000 miles, visiting spectacular destinations over the next 27 months.

With 15 knots of trade winds blowing, and ocean swell, it was a spectacular start to a great adventure. For the first part of the Oyster World Rally, the fleet will be exploring the Caribbean, Dutch Antilles and other amazing destinations. In early March, the 31 strong Oyster fleet, will rendezvous at the Panama Canal to transit into the Pacific Ocean.

Oyster Group Chief Executive, David Tydeman orchestrated the start line and was full of emotion as the fleet started the second edition of the Oyster World Rally. “The Oyster World Rally is now declared open. It is so exciting to see the fleet underway at last. It has taken years of preparation to get here, some entries came in four years ago. Oyster 62 Dalliance got a brilliant start, and was hailed via VHF by Oyster 725 On Liberty, requesting to come across their bow, which was granted. These sailors have already formed friendships that will just grow as the rally continues. We have a lovely range of boats and this fleet is what Oyster is all about; family and friends sailing on boats that they can handle by themselves with just a handful of people on board. I am delighted to say we have the first paid entry confirmed for the third rally which will start in January 2021.” 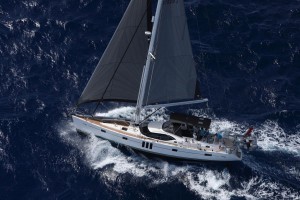