It is a truth universally acknowledged in the boat park, that while some classes are talking tech or weather, the windsurfers are finding out where to eat and chill out. But when it is competition time they are as fierce as anyone and the men’s RS:X at The Hempel Sailing World Championships Aarhus Denmark 2018 Test Event whetted the appetite for the battles to come here in a year’s time.

On a day of light airs, there was drama all the way to the finish line as the leader all week, Pawel Tarnowski, the 2015 European champion and one of Poland’s powerhouse production line of windsurfers, lost his gold medal by five metres, having been caught out by a gust and passed by the fleet.

France’s Louis Giard, the European champion, fresh from finishing second in the world cup final in Santander in June, was one of those who planed past, 200 metres from the finish line, and managed to finish second, as Tarnowski slipped to eighth. With the double points of the medal race it meant they finished level on points; Giard taking gold because of his better performance at the last. But the Frenchman admitted he had not known until after the race, and had not been thinking about it after Tarnowski sailed away at the start.

“I didn’t start the medal race with the goal of winning the event, he (Tarnowski) was 12 points in front of me, and I was on equal points with third and fourth place,” Giard said.“So, the main goal was to secure second place. Pawel was in front of me from the start, so, in my mind it was just about staying second or third. But in the last downwind a gust came and Piotr (Myszka, Poland) started planing and I tried to do the same and I finished the medal race in second place, but it was only after the finish line I realised that Pawel did not start planing and lost a lot of places. I was a bit lucky.”

But Tarnowski, who has struggled to find time to train while studying engineering in Dansk, was philosophical. “Everything had been going perfectly for me,” Tarnowski said. “I counted the places and it was still ok but just 200m from the finishing line, there was a strong gust behind me and the two guys behind got it 10 or 15 seconds before me - It was downwind so they caught it faster - and they passed me by a few metres. When I caught the gust, they were already slightly in front of me, and I was doing my best to catch at least one guy, but I didn’t manage it by about 5m and I lost the medal, it was so horrible for me. But we had a great week. I was going well, I enjoyed all the conditions, all the wind directions. The level was very high it’s been really useful coming here before the Worlds.”

The RS:X women’s winner had been decided even before the medal race such has been the dominance of Lilian de Geus, the Dutch windsurfer, who was fourth at the Rio Olympics last year. De Geus stated the race a massive 25 points clear of Italy’s Marta Maggetti, who had to pull out a fast finish to move up to sixth and hold onto second place overall with four sailors in contention. Her compatriot, Flavia Tartaglini, won the medal race to jump into third and a little ruefully said she almost had silver.

“I was actually quite surprised that it was easy this week,” De Geus said. “I’m really happy with my series. I wasn’t expecting it before the event. It’s my first time here and it’s nice to have good memories of place. That gives me confidence.”

The 49er was closer to the Men’s windsurfing as the leaders, the Australian brothers, Sam and William Phillips, were caught by the Austrians, Benjamin Bildstein and David Hussl, in the final race and slipped back into seventh. The two pairs had been battling at the front all week and dominated the 49er’s unique series of three medal races (where points are not doubled). The Australians won the first and finished second in the second, behind the Austrian’s but then got into trouble on the first beat of the last race as the Austrian’s attacked them.

“It was a tough one,” Sam Phillips said. “We needed to finish within one of the Austrians. We started on starboard, the Austrians were below us, a boat rolled over the top from the windward end, we tacked onto port. We came into the middle of course and it was a tight cross by the Austrians and they just managed to tack in front of us - that was a pretty defining moment in the race. Following that, they put two more tacks on us as we tried to free our air and we were just back a little bit and struggled from there, we were last at the windward mark.”

It was not an out-and-out match race because the Austrians needed to extend ahead.“But, they just made it really difficult for us, and it really worked,” Sam Phillips said.

There is no doubt that both pairs were not just here on reconnaissance for next year, they wanted to win this one.

“After (the first two medal races) it was just about them or us who was winning,” Bildstein said. “So, we sailed slightly more aggressively but not unfairly. I think it was a nice match, especially as on the second day it was really us two boats matching each other, it was big waves and heavy wind and all three races, both of us were top three. It was a really nice fight - we are good friends with them.”

Denmark’s 49erFX Olympic bronze medallists in Rio, Jena Mai Hansen and Katja Salskov-Iversen won gold in the 49er FX as expected. Almost mathematically uncatchable before the three medal races, they put things beyond doubt by finishing first, third and first. Behind them the fight was more intense. The Norwegian twin sisters, Ragna Agerup and Maia Agerup held onto silver and the Americans, Stephanie Roble and Margaret Shea took bronze.

The Nacra 17 medal race was cancelled. Lin Ea Cenholt and Christian Peter Lubeck, the leaders after the 10 rounds, were awarded the gold, Denmark’s second of the day.

That leaves the Laser, the Laser Radial, the Finn and the 470 medal races tomorrow(Sunday).

A 90 degree wind shift in the last of three rounds of the lasers tonight, shook things up at the top of the fleet, with Tom Burton, the Australian Olympic Champion, finishing 54th and dropping far into second overall, 13 points his fellow countryman, Matthew Wearn.

In the Laser Radial, Marit Bouwmeester, the Olympic champion, went home early, to protect a back injury she is just returning from. That left the top spot open and Sweden’s Josefin Olsson and America’s Erika Reinneke stepped up in their last three rounds to claim the first two spots respectively.

In the Finn, the Netherlands’s Nicholas Heiner and Hungary’s Zsombor Berecz increased their grip on the top of the leaderboard after their two races yesterday.

In the women’s 470, a win and then a second place finish in their third race of the day, gave the Swiss team, Linda Fahrni and Maja Siegenthaler, clear water at the top of the leaderboard.

In the men’s 470, another family bond, showed its strength, with the Turkish brothers, Deniz Cinar and Ates Cinar, finishing second, second and third in their three rounds to take a 5-point lead into the medal race as French pair Kevin Peponnet and Jeremie Mion slid to third.

The final day of the racing at the Test Event begins at 12:00 (local time) in Aarhus Baytomorrow (Sunday). 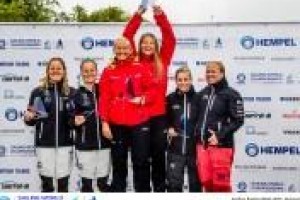 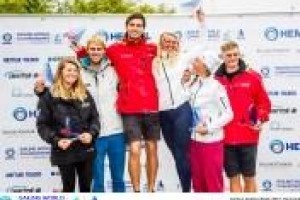 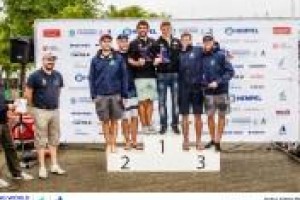 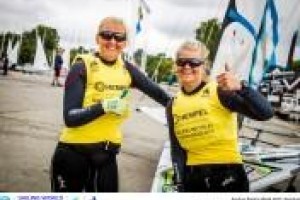 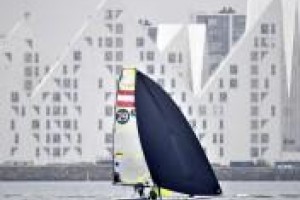 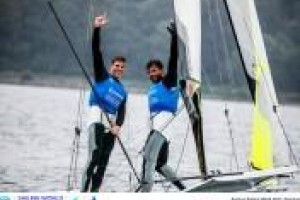 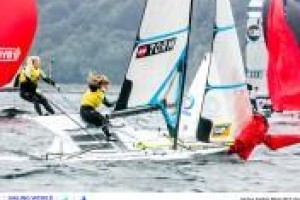 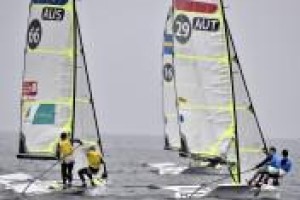 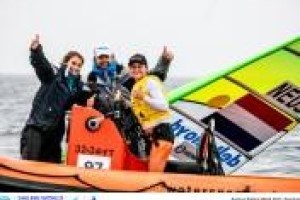 Steering the Course 2022, shine the spotlight for women in sailing