The Scandinavian Gold Cup is a diminutive trophy with an immense prestige and a unique format. Now in its 101st year, this ornate and priceless trophy has been raced for by International 5.5 Metres since 1953. It is considered one of the most prestigious competitions in yacht racing, and certainly a highly valued and treasured event for the 5.5 Metre Class.

The format for the Gold Cup is unlike any other. After three races, only those who have won a race remain in the competition. The winner is the first to three race wins, so the event can be won in three races or it can last to the maximum possible seven races. At the most, three boats can move to the finals stage. It normally ends in a match race. After winning in both 2018 and 2019, Kristian Nergaard, sailing Artemis XIV, and representing Norway, will be eyeing up the triple, a feat only achieved once in the history of the event, and that was by Nergaard himself from 2008-2010.

"My last time here was 29 years ago, and yes, we do forget over time. But I do remember that everyone expected big winds but it became a World Championship with medium air and lots of swell. The winner at the time was Chlica Chlica, a new design and forerunner of the boat that was designed afterward. Before 1991 the faster boats had the delta keels, but the new design with shorter keel became much faster especially once the chop came up. Christian Wahl and his crew, at the time, basically sailed away from the rest with much greater boat speed, not forgetting their sailing was excellent.”

This year he is sailing with regular crew Johan Barne, while Anders Pederson joins the team for the first time. Pedersen is one of the world's top Finn sailors and will represent Norway at the Tokyo Olympics in August.

“Trond [Solli-Sæther] was unable get away from work this time. As Anders only has limited experience with Fives and Solings we need to spend quite some time on getting the technical manoeuvres sorted out. On the other hand, and with Anders' Olympic campaign coming up, he will definitely bring on lots of positives to our team for the two regattas.”

“It is always challenging to be the ‘double defender’, but focussing on the usual things we do would probably be the best. We mustn’t let the ‘we are defending’ thing in the back of your mind affect our sailing.”

“I am looking forward to sailing here in Pittwater again. Thanks to all locals and Martin who have done a great job getting everything in place.”

Britain’s entry is Girls on Film, skippered by Peter Morton. Last year Girls on Film was the only boat to take a race off Artemis XIV, forcing a thrilling fourth race match where he held the early advantage, only to lose that in the later stages of the race.

The 2018 World Championship winning crew of Mark Holowesko, Christoph Burger and Peter Vlasov are back with a new boat, New Moon II, a 2019 development of the popular Wilke built Seb Schmidt design. This will be the first regatta for the new boat, and, after being knocked out in the early stages last year, and finishing second to Artemis XIV in the 2019 World Championship, New Moon II will be one of the main contenders for the Scandinavian Gold Cup and world title.

Australian International 5.5 Metre President, Martin Cross, who is also skippering the Australian entry, Beta Crucis, said, “It is wonderful to have the nations competing for the historic Scandinavian Gold Cup in Australia and at the RPAYC again after so many years. It is such an interesting format where winning is all that matters. We look forward to seeing the Modern 5.5 Metres in action on the iconic Palm Beach Circle”

As holders, a second entry is allowed from Norway, this year represented by Otto, which normally sails under a Swiss number, and is skippered by Bent Christian Wilhelmsen. Otto took the final Grade A event in 2019, dominating the French Open in Cannes, which was also Wilhelmsen’s first ever win in the class.

The line up is completed by the Swiss entry, Shaolin, skippered by Cyrus Glochan. Shaolin is one of the top boats from Lake Thun, Switzerland, one of the main European clubs with fleets of 5.5 Metres.

Michael Lockley, Commodore of the Royal Prince Alfred YC, said, "The Royal Prince Alfred Yacht Club members are very excited to welcome the 5.5m sailors to beautiful Pittwater. We have a long history and tradition of keelboat racing here at RPAYC and are looking forward to seeing all the action this world class event will provide. I look forward to meeting everyone and being a part of this fabulous event."

There is plenty of action to look forward to over the coming two weeks with several Cup events running parallel to the Scandinavian Gold Cup, before the World Championship runs from 9-13 January in a nine race series.

NOR, Artemis XIV, NOR 57, Kristian Nergaard 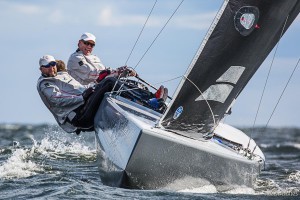 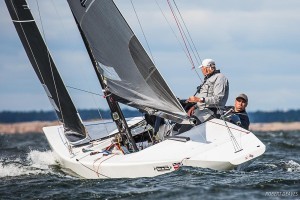 Aspire wins on wild and windy Wednesday in Cannes